THIS IS NOT WHAT I EXPECTED IT TO BE! UP IS DOWN, DOWN IS UP, AND ICE HOCKEY IS THE ONE WITH THE DAMN PLAYER SELECTION!

As you may remember, I posted a Pre Game with my mind’s eye not being able to distinguish between Ice Hockey and Blades of Steel. Well, dear reader, as you can tell from the headlines… was I wrong. So very wrong. 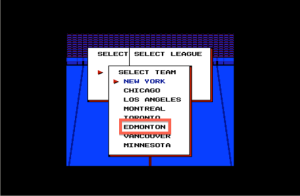 In short, Blades of Steel is a very solid game. It’s just not the game I remembered… not in the least. The controls were also a weird adjustment for me.

(I’ll likely post about this in the future, but I was/am/always will be a huge fan of the early NHL games on the Genesis. They were probably THE fundamental series of games of my childhood. And lately I’ve been trying to get into the more modern NHL franchise with… limited… success. Anyway, all of this is context to me trying to get my little brain around the controls in Blades of Steel.)

My first few plays didn’t go phenomenally well (this image is of the CPU scoring… which it did a lot of), but that’s not a game issue. It’s entirely my lack of skill + total and utter loss and how I had misremembered this game. I’ll definitely be playing more Blades of Steel.

And stay tuned for my Game the Game for Ice Hockey!

5 thoughts on “Blades of Steel on NES – Game the Game”